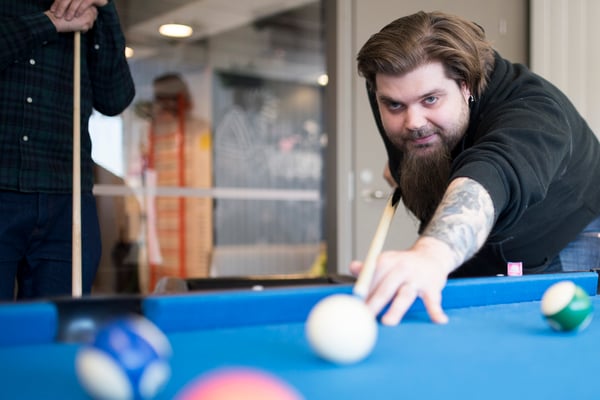 Eetu joined Siili as an apprentice, in the first iteration of Siili’s Master & Apprentice program. He ended up sending in an application when his friend recommended Siili as a company with good reputation and emerging opportunities.

In his past, Eetu worked as a sound and lightning technician, so he’s switched big music festivals to coding.

“What the IT world and the light & sound business have in common, is the culture where nobody breaths on your neck if you do your job properly”, Eetu says.

While working for client projects, Eetu is also finishing his studies on computer science.

“Combining work and studies has gone well at Siili. I still have time for my hobbies, ice hockey, baseball, and practice guitar playing”, Eetu tells.

Learning does not stop on his studies though – at work Eetu has set becoming an Agile coach as his goal, and he is constantly thriving for it.

“If you want to progress on your career and learn new things, Siili is a good place to be. Here you’re given a lot of responsibilities, but also a lot of freedom”, he affirms.

Welcome to the workplace of your dreams

Our award winning Sitefinity team, working with international clients is looking for an experienced CMS Developer to

Are you hands deep in architecture? What are we looking for? As a Hands-on Architect you’re the missing link between

We are constantly growing and hence also looking for new Siilis to join our 100-people team in Oulu. If you didn't find

Are you passionate about automation or interested in software robotics? Do you want your work to have an impact and be